Assess. Adjust. Repeat. How to Create a Resilient Garden 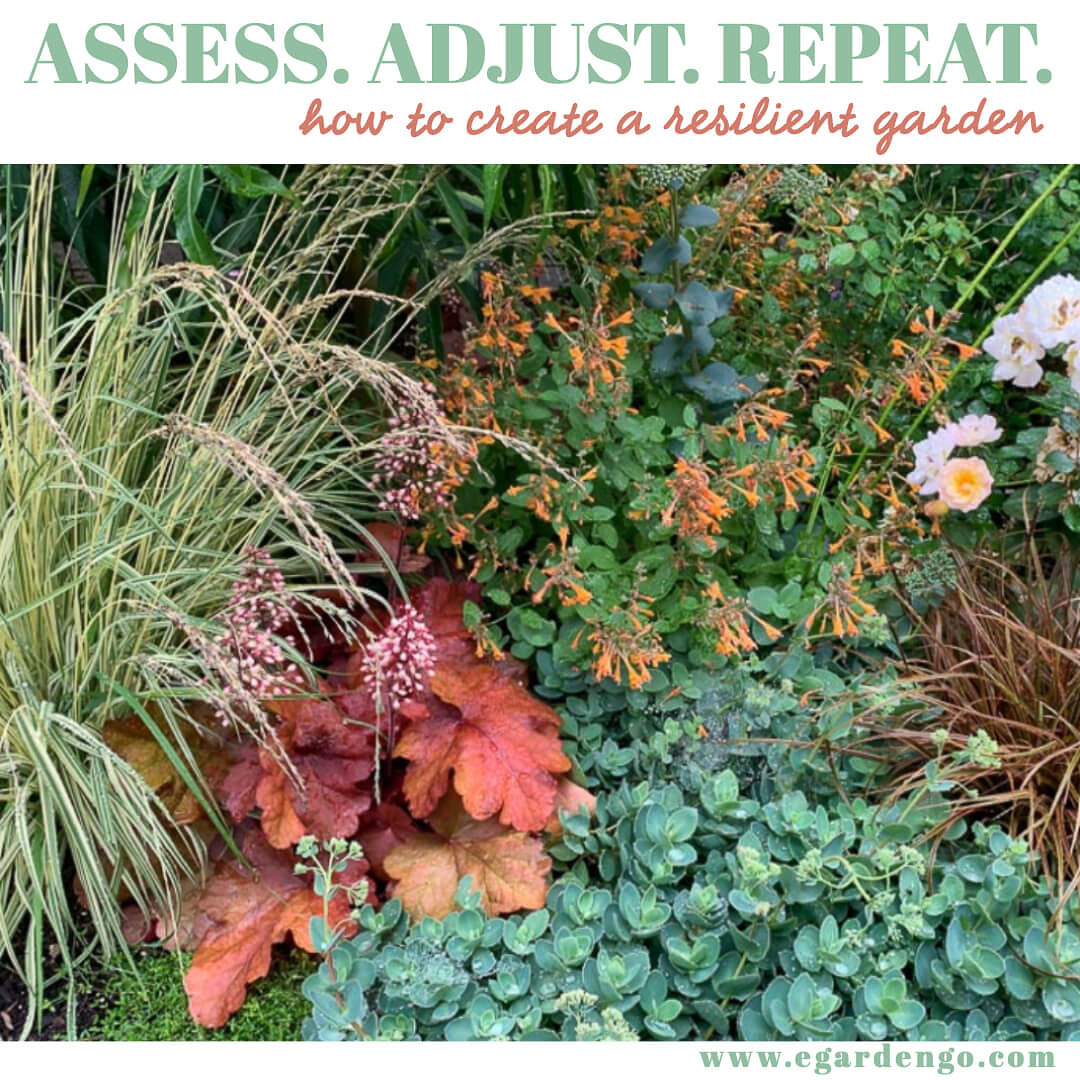 I’ve been away from my garden for longer than usual of late. Physically out of the area for about two weeks and too busy to engage with it for about two weeks before that due to my schedule. These absences were partly planned, partly unexpected and for a duration longer than initially expected. Vacations and trips, planned or otherwise, are commonplace—so I’m not calling that out as unusual per se. But I did find myself musing on the state of my garden when I returned this last time.

Leaving my garden in high summer (or spring for that matter) is always hard because I love to watch and enjoy its daily cycles of evolution and emergence. Two weeks is a long time in the annual cycle of a garden, especially when it’s in full swing. But being away for an extended period of time also provides an opportunity to see your garden with fresh eyes upon your return—to really see how it holds up to a stint of benign neglect. In a word, how resilient it is. You can then draw upon these observations as you decide what to do next in your garden.

I've realized that the daily watching and light-loving-care that happens, just a little bit each day, makes a huge difference in how my garden performs.

Being away brings it home to me just how much that puttering—a nip here, a tuck there, an extra drink of water for you—contributes to keeping it all moving in the right direction.

For example, I’m having a terrible time with powdery mildew and other stress-induced foliar diseases this year. I typically solve these types of problems with judicious and aggressive use of my secateurs. Being away, I got behind on cutting out the offensive foliage as it appeared and it's gotten much worse in my absence. I'd been needing to do some big, wholesale cuts but avoided doing so right before the garden tour in late June. Then we left and now it’s a bit more urgent.

And I’m late on deadheading the Verbena bonariensis (above) and bread seed poppies (Papaver somniferum ‘Lauren’s Grape’), both voracious self-seeders. It’s a delicate balance that I try to strike with them and if I missed my window by too much I'll likely find them more rampant than usual next year.

When I left, towering lilies promised fragrant blooms. Upon my return, I found them toppled. Perhaps if I’d been here I would have noticed and staked them in time. As it happens, I have a lovely bouquet of Casablanca lilies without "guilt." In my small garden, I don’t often cut my lilies because I don’t feel like I have enough to take them out of the scene if I cut them.

As I’ve been examining my garden I’m taking stock—noticing what looks tired and downtrodden and what’s still looking good. For those plants that are looking tired, I’m taking into consideration what the reasons might be. In some cases, it’s a natural cycle. They’ve done their bit and now they’re going over. I won’t hold that against them.

In other cases, something's gone awry. Slug-susceptible plants that could have used another douse of Sluggo didn’t get it. Heavy feeders that would have appreciated a shot of fertilizer are petering out earlier than I’d like. Newly installed plants that weren’t under my watchful eye didn’t get the extra dose of water that would have saved them from drying out.

I expected more from SunBelievable™ Brown Eyed Girl Helianthus (pictured above). I'd hoped for a more robust performance based on the hype and the princely sum I paid for it compared to the price of other annuals on offer. It hasn’t fared well in my garden at all. It clearly didn’t like being part of a mixed planting scheme. If I were to plant it again, I’d go with a one-plant-one-pot approach that would offer it a less competitive environment to see if that might help.

I’ve been grooving on my blanket flowers (Gaillardia, pictured above) and their performance over the last month has only reinforced my affection for them. What a workhorse. Historically, I’m not much of a dead-header, instead preferring flowers that don't require that extra care. But I’ve made a point to be a bit more attentive to these guys and they’ve rewarded me handsomely. They’ve gone through one full cycle of blooms, I deadheaded, and now they’re blooming again and full with buds. They didn’t blink at the heat and seem to be very drought-tolerant.

The Agastache and Echinacea 'Kahuna' (above) combo in my front slope is still going strong. The Echinacea 'Merlot' in the parking strip, not so much (left, crisp and damaged due to water stress). A bit surprising because the palette of plants used in each area is quite similar in their cultural needs. I've concluded that the main difference is the soil and how effectively the water is being applied in each area. In my parking strip, the soil drains exceptionally fast. The current method of irrigation uses spray heads and they're not very effective in terms of getting water to the interior of the beds. The water doesn’t make it to the plants in the middle and what little does, drains away very, very quickly. Poor babies, water all around and not a drop for them to drink.

I've got plans to convert the sprays to a drip system this fall as I did on the front slope earlier this year. The slope doesn't seem to be suffering from water stress even though the plantings are new this year so I expect making a similar change in the parking strip should help a lot.

Many, many plants performed like champs. Below are some highlights. 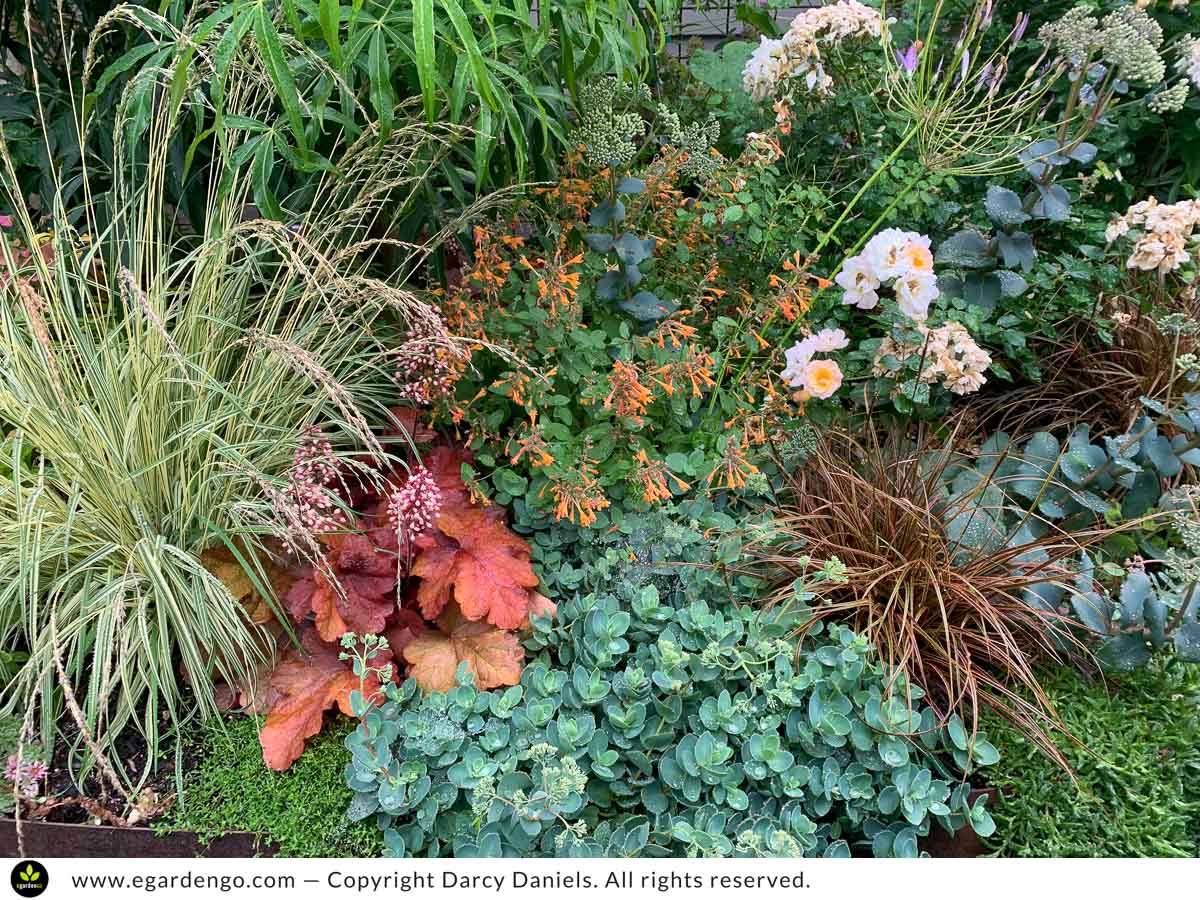 Cramscaping is a great way to grow lots of fun and interesting plants in a small space and it helps keep the weeds at bay by crowding them out. It does, however, require ongoing and heavy edits to keep it looking good. This weekend I'll be out there whipping my garden into shape and having a blast doing it.

What are your garden plans?